Those who have spent any time in an American History class is aware of the famous Battle of Hampton Roads. It’s the infamous naval conflict between the Merrimack (captured and renamed the CSS Virginia) and the USS Monitor, two of the world’s first ironclads gunboats, which duked it out to a draw in the waters of Chesapeake Bay.

While these two vessels have become legendary, they weren’t alone; many more gunboats were fighting on the rivers during the American Civil War. Technology had begun to modernize, and the gunboats of the Union Navy and Confederate fleets were no different. The war revealed a point of transition in the evolution of sail to steam as watercraft shifted from the traditional frigate-style sailing vessel towards the warships we see today. Turrets were introduced, armor became commonplace, and propulsion was beginning to change from paddle-wheels to the screws. The era of wooden ships of the line died in 1862 as the ironclads rose to prominence.

My current project, Coal Belly, is a weird west fantasy set on a planet crisscrossed by interlocking rivers. It’s a rough-and-tumble world where riverboats are omnipresent and necessary for everyday life and used in war. In the book, the empires of Artada, Othwell, and Cyr patrol their territory with a variety of gunboats, and I wanted a spark of authenticity. With that in mind, I felt it necessary for to research the naval fleets of 19th Century, with the Mississippi and its tributaries playing such a vital part in the American Civil War, it was the perfect place to start.

The Union dominated naval warfare from the outset. Where the Confederate forces saw some early advances with the capture of the Merrimack and its retrofitting, it didn’t take long for the Union to catch up and overwhelm the Rebels. Gunboats came in many varieties and could be broken down into four main categories: Rams, Timberclads, Tinclads, and of course the emerging Ironclads. There was a fifth category as well, used primarily by the Confederates, which is commonly called the Cottonclads. Let’s look into each of them.

These were the creation of Colonel Charles Ellet Jr., a Navy man who was convinced that the ancient ram technology could be adapted to modern usage. Under his guidance, he built out the United States Ram Fleet. The rams tended to be sidewheelers and were usually faster than their civilian counterparts, and unlike other navy boats they carried few guns; instead, they used reinforced timber bows to smash into opposing boats.

Only four timberclads were used during the war, the USS Tyler, USS Conestoga, USS Lexington, and the USS Avenger. While these were modeled after standard sidewheel riverboats, these vessel’s crew were protected from small-arms fire by 5-inch thick oaken bulkheads. To me, they’ve always looked like a floating windowless factory.

The most common gunboat of the Union Navy’s river fleet were the tinclads. These were usually sternwheelers with metal sheeting tacked to the side to protect the crews. Keep in mind that this thin sheeting wasn’t useful while under fire by heavy artillery. It was chosen to protect against small arms. Where civilian packets tend to feature open decks and promenades, most tinclads have a boxed-in look. Each of these boats was assigned a number which was painted on their pilothouse.

The first iron vessels were designed to be ocean-going and operated mostly along the coast. The French Glorie was the first, but more followed her. On the rivers and during the American Civil War, Ironclads came in many varieties—two were most common. The first was the turreted Monitors named after the famous warship the USS Monitor designed by John Ericsson.

“The sea shall ride over her and she shall live in it like a duck.”

The second type was the casemate-style gunboats with sloping sides, not unlike the USS Merrimack. These were more commonly found on the rivers. At the beginning of the war, the Union converted civilian packets, but later they developed the City-class ironclad; these 13-cannon gunboats ruled the river. After their introduction, they were present at every major conflict along the Mississippi. Interestingly, many of these City-class ironclads were centerwheelers with their paddle wheels located at the aft-end of the center keel and protected by bulkheads and armor plating.

A creation of the Confederate fleets, the cottonclads looked much like their counterpart riverboats. However, as an added form of protection, their hollow bulkheads were filled with packed cotton. Cotton bales were also set up around guns and pilothouses as additional forms of protection.

You could write entire books on gunboat strategy in the American Civil War which isn’t the goal of these posts. However, if you’re interested in learning more, I’d recommend starting with Sam Smith’s article, The River War. But for this post, let’s take a gander at some images I’ve gathered as a part of my research over the last few years. These will provide visual examples of the five categories of naval gunboats and give a glimpse of the life of a brown water riverman; check them out below.

Blacksmiths on the USS Lehigh

Damage to the CSS Teaser

Crew of the monitor USS Lehigh 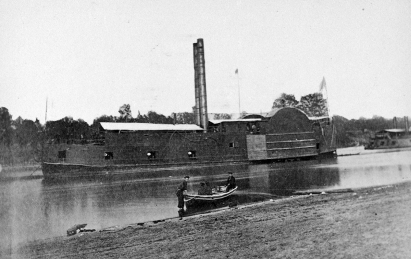 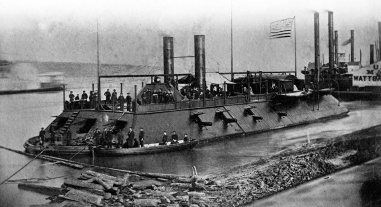 Officers on the upper deck of a Union monitor gunboat 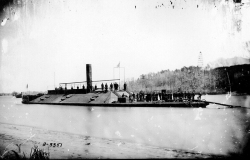 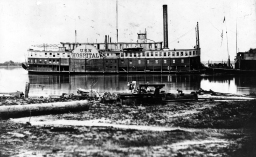 The USS Redrover, a Confederate boat captured by the Union and turned into a hospital boat 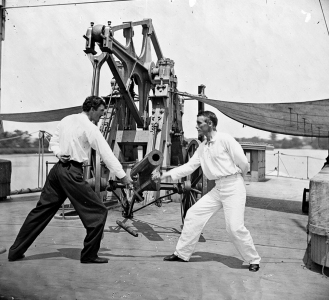 Fencing on the deck of the USS Hunchback 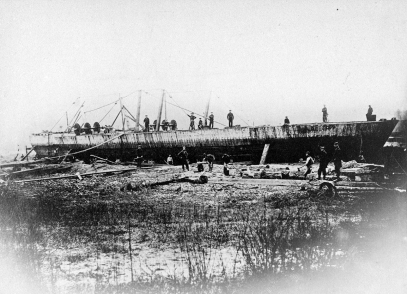 Wreck of the USS Indianola

USS Commodore Perry, a Ferryboat Converted into a Gunboat on the Pamunkey River, VA, 1864 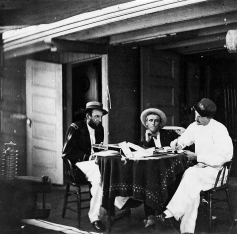 Officers of the USS Monitor

Controlling the Mississippi River and its tributaries was a vital part of the war effort. I can see why so much innovation happened in such a short amount of time. Technology provided an advantage, and in the narrow confines of a river, that advantage is beneficial for a brown water navy. With the tale crossing empires, expect to read about plenty of gunboats within the pages of Coal Belly.

The pictures above have been collected over the last five years, so I am unsure from where they all come (usually the Library of Congress.) But, they’re all old enough to be in the public domain. As before, in some cases, I did some minor color correction and cropping. I’m happy to answer any questions folks have about any of these images or riverboats in general. (Sometimes it gives me a good excuse to research something.) You can send me an email or leave a comment below. I love comments.

This is the latest in my series of posts sharing my findings from my research for Coal Belly. You can check out the other riverboat-related posts in the links below.