With the recent releases of Blaeu, Aubers, and L’Isle you’ve probably noticed that my map sets have gotten a much more distinctive look. Previously, I had been using Franklin Caslon—which is a beautiful historical typeface but I’ve been using it for ephemera connected to The Bell Forging Cycle for a while, and I wanted something fresh.

I decided to revisit the branding and put together something unique that highlighted the historical aspects of the brushes. It also needed to remain playful. Making maps is fun and keeping the quirkiness inherent in that was important. Here’s where I’ve landed. 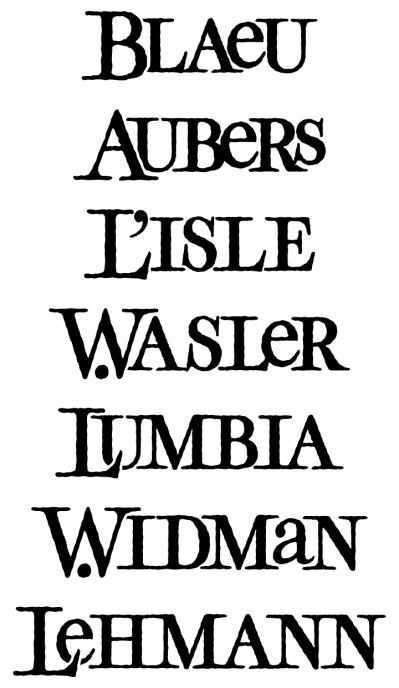 The new wordmarks help unify the sets, and I think they really help carry the tone that was missing in the initial designs. Each name is set in Geographica Hand from Three Isle Press—they specialize in historical typefaces, and I cannot recommend their work enough. If you want to add a level of authenticity to your fantasy maps consider licensing a few from them. (Suggestion: a combo of Antiquarian and Antiquarian Scribe, they work really well together.)

I’ll slowly be rolling out the new system for older sets, but expect to see it on future map sets going forward. You can see the new branding in use below and find links to each of the sets which you can download and use for free.

Based on Joan Blaeu’s Terræ Sanctæ—a 17th-century tourist map of the Holy Land—this set includes a ton of unique and varied signs as well as a large portion of illustrative cartouches that can add a flair authenticity to any fantasy map. Elegant and nuanced, everything works within a system, but nearly every sign is unique.

An 18th Century brush set based on a map from 1767 detailing the journey of François Pagès, a French naval officer, who accompanied the Spanish Governor of Texas on a lengthy exploration through Louisiana, Texas, and Mexico. A unique southwestern set with a few interesting deviations—including three volcanos!

A departure from the norm, this set is based on the Plan Batalii map which was included in a special edition of The First Atlas of Russia in 1745. A detailed view of a battle during the Russo-Turkish War of 1735–1739. Canon! Units! Battles! Perfect to map out the combat scenarios in your fantasy stories.

A 17th Century brush set based on the work of Georgio Widman for Giovanni Giacomo de Rossi’s atlas published in 1692. A fantastic example of Cantelli da Vignola’s influence and a solid set for any fantastic map. This is the workhorse of antique map brush sets—perfect for nearly any setting.

An 18th Century brush set based on the work of Gabriel Walser with a focus on small farms and ruins and a solid set of mountain and hills. This is a great brush set to see how Vignola’s influence persisted across generations. It was etched over 80 years after the Widman set, but you’ll find a few familiar symbols within.

A sketchy style brush set I drew myself that focuses on unique hills and mountains and personal customizability. My attempt at trying to channel the sort of map a barkeep would draw for a band of hearty adventurers. It includes extra-large brushes for extremely high-resolution maps.

Named after Austrian topographer Johann Georg Lehmann creator of the Lehmann hatching system in 1799, this is a path-focused brush set designed for Adobe Illustrator that attempts to captures the hand-drawn style unique 19th Century hachure-style mountains.

Remember, all of my brush sets are free for any use and is distributed with a Creative Commons Attribution 4.0 International License that means you can use them in commercial work and distribute adaptations. All I did was take the time to convert someone else’s hard work into brushes.

I hope you like the new look and feel. Expect to see the family grow as I release more sets in the upcoming months. Show me what you created by sending me an email! I love seeing how this stuff is used, and I’d be happy to share your work with my readers.

If you like my free brushes and would like to support my work, instead of a donation, consider buying one of my weird speculative fiction novels. The first book—The Stars Were Right—is only $2.99 on eBook.

You can find all my books in stores and online. Visit bellforgingcycle.com to learn more about the series. And please, help me out by telling your friends! And what’s a pulpy urban fantasy novel without a map? When my 2nd book in the series launched I shared a map detailing the expanded world, you can check it out here.