It’s become a tradition around here to reflect on the past year by sharing ten photos that summarize the last twelve months. The rules are simple: ten photos, no more, no less.

I love doing this.

Selecting my ten forces me to consider my year in a different light, it slows down time. Perception and reality are often wildly different. If you asked me how 2017 was going a few months ago, my mind would have drifted towards the negative. There’s the endless outcry on social media, the seemingly exhaustless supply of terrible news/decisions/people coming from DC, and the reemergence of Nazis and Nazi-sympathizing dickheads. It’s hard not to feel overwhelmed.

However, when I go back through my year, I see a lot more good than bad. I see momentum. I see friendships, adventure, and change. I see passion. When so much time and energy is devoted to focusing on the negative, one often forgets the positive things that occur. It doesn’t negate the bad. There’s still trouble and tragedy in the world and society must remain vigilant. But this sort of ritual can help one recenter. Try it yourself.

So, with that said, let’s take a look at my 2017 distilled down to ten awesome photos. 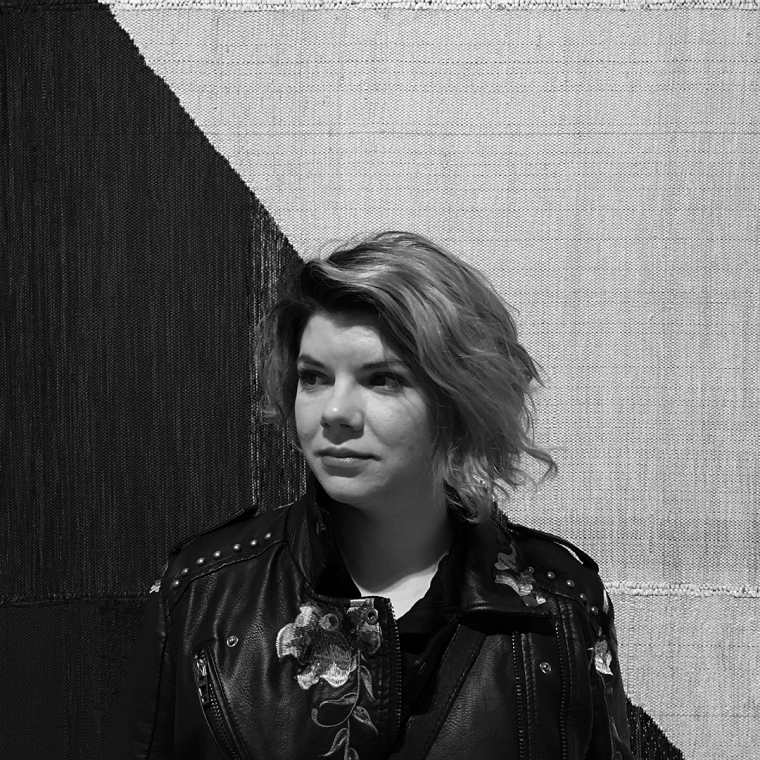 At the beginning of the year, Kari-Lise and I took a trip up to Vancouver, British Columbia to celebrate her birthday. We both took a lot of photos, but this picture of Kari-Lise in the Vancouver Art Gallery is the most important to me. In 2018 Kari-Lise and I will celebrate 15 years of marriage, and I cannot think of a better partner in this crazy life than her. She’s there to pick me up when I stumble and raise me higher when I succeed. I wouldn’t be the man or writer I am today without her. I can’t fathom a better way to begin a year than standing by her side and celebrating her birthday. 2017 might have been tough, but with her, I was able to endure.

I marched in the Women’s March. I felt it was important to walk beside the fantastic women in my life. This was their march, not mine. I’m not flamboyant or loud, I don’t chant or shout, but I wanted to stand in support and be present.

In February, eBooks of Old Broken Road went on sale for 99¢, and it was offered to BookBub subscribers. It took off like gangbusters. It was a whirlwind couple of days. I sold thousands of books, and for a brief stint, I ranked among the Top 100 Science Fiction and Fantasy Authors on Amazon, just a titch above two of my idols, Kurt Vonnegut and Stephen King. It was great to see so many new readers step into the world of the Territories. (Someone tell ’em to go leave reviews.)

Kari-Lise had another fantastic show! Wake opened April 1st at Thinkspace Gallery, in Los Angeles. Us and several friends, made the trip down to celebrate. (Thanks, Redd, Siolo, and Vinnie.) The show was a success, the turnout was great. I’m really proud of Kari-Lise, and the work she created for this series. Check out the full show over on Thinkspace’s website.

I returned once again to Norwescon. This year my hometown convention celebrated its 40th anniversary, and I was honored to be a panelist. As always, I had an absolute blast. Saw some friends, had some great conversations, learned a lot. I’m hoping to go again in 2018. More more info, check out the full Norwescon 40 Debriefing.

I participated in the March For Science on a rainy Earth Day with Kari-Lise and my little sister. Like the Women’s March, I felt it was essential to me to stand and be present.

Between travel, shows, and work, we didn’t get into the mountains as much as we wanted. But when we did, it was phenomenal. This photo was taken at Otter Falls this summer, it’s one of my favorite spots in the Cascade Mountains. 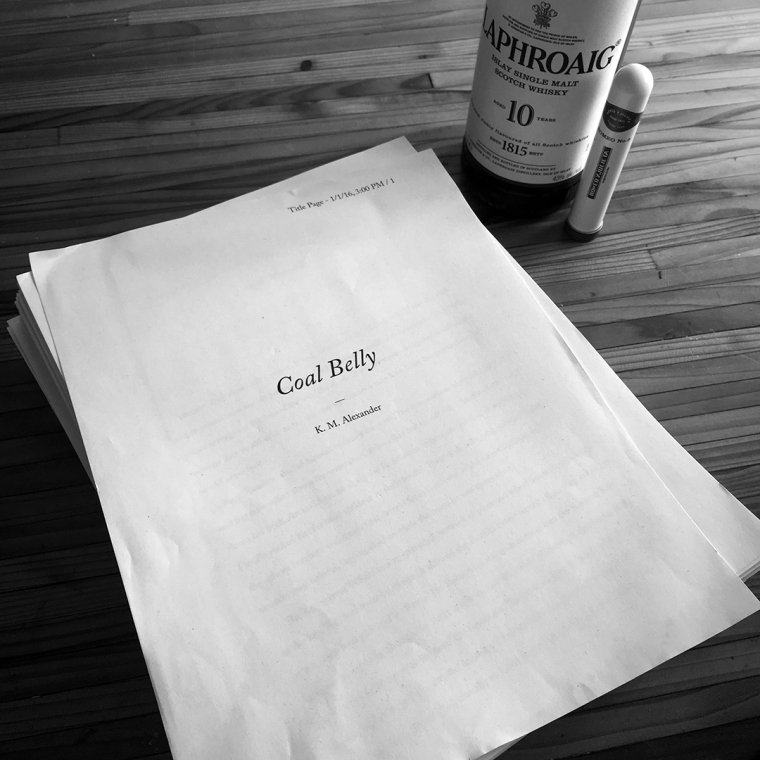 I finished a manuscript. Coal Belly is a story I wrote a long time ago and attempted to shop. After multiple rejections, I eventually put it aside. But that wasn’t the end. The characters and setting haunted me always tickling at the back of my mind while I worked on the Bell Forging Cycle. I returned to it in 2016, starting from scratch and completely reworking much of the book. It took me almost a year and a half, but I’m immensely proud of the result. I’m in the middle of editing it now. I can’t wait to share it with the world.

I went to Scotland, and it quickly became one of my most favorite places on the planet. (Right up there with Iceland and Norway.) We traveled with some friends for half the time, saw castles, hiked mountains, drank scotches, fell into bogs. It was one of the best trips I’ve taken in my life, and I can’t wait to eventually go back. Read the Scotland Trip Report. 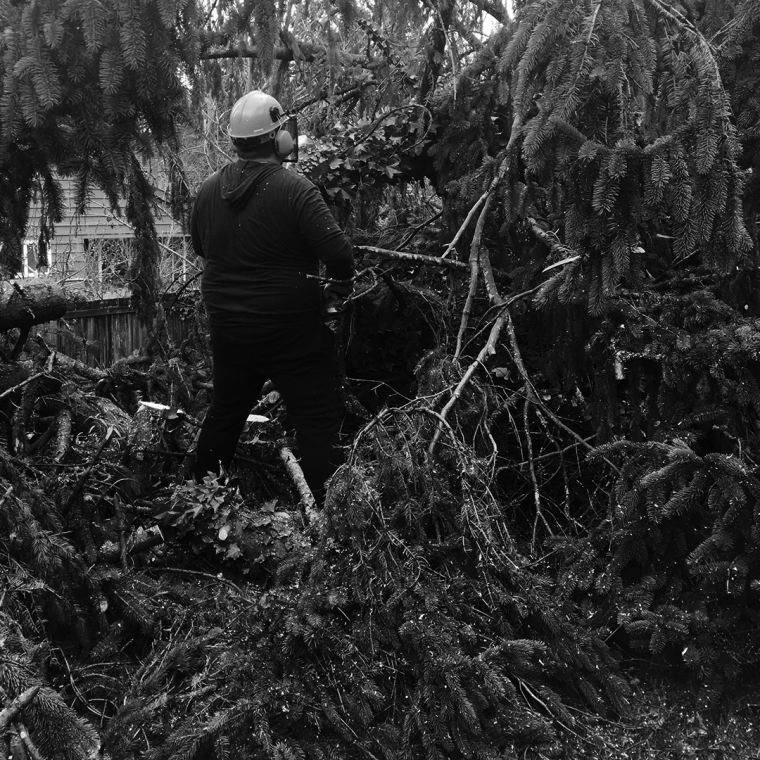 Change occurred. This summer Kari-Lise got into gardening which meant on some level I also got into gardening. We fell in love with the direction our little backyard oasis was taking. But, during a late-autumn windstorm, the enormous fir that had been one of the centerpieces toppled taking out a beautiful maple tree and a large bush with it. Thankfully, no one was hurt, and only the landscaping damaged, but the fall changing our backyard forever. It was tough to swallow. But life is change, and one must adapt. Holding onto the past can be just as dangerous as ignoring the future. So, a few weeks ago I took up a chainsaw and started my (unexpected) winter project.

As is always the case, it was hard to narrow this down to just ten photos. So much more happened and it was all impactful in various ways. I mean think of the things I’m leaving off! I went to Lilac City Comicon with my pal Josh, I went to Orycon, there were backyard barbecues, mounds of research, multiple art shows, we explored the Pacific Northwest, I read piles of books, and we’re raising insects. But, narrowing the selection to ten is apart of the ritual.

Want to revisit photos of past years? Click on any of the links below and check out my Ten Awesome Photos from that specific year. It’s interesting to watch subtle changes year over year.