If the boilers are the heart, the engines the muscles, then the pilothouse is the brain of the riverboat. This small room perched high above the deck controls the steamboat. It is here where the pilot holds court, directing the engines, calling for leads, watching the waters, and guiding the big boat safely along its course.

Pilothouses came in all shapes and sizes, some were fanciful, onion-domed, and decorated with wooden designs known as gingerbread. Others were simple and austere, with little to no decorations and flat-roofed. Early pilothouses were open to the elements, while later pilothouses were glassed in to protect the pilot from the weather.

The enormous spoked pilotwheel was the focal point of the room. It rose arcing from the floor and connected to a tiller rope giving the pilot command of the steamboat’s rudders. Wheels varied in size, but most were quite large. The Steamer Sprague had an enormous wheel that measured over thirteen feet.

Communication between the pilothouse and the engine room varied from boat to boat. Before the inventions of the engine-order telegraph, pilots communicated by signaling the engineers via bells-and-gongs systems. Bells ropes were pulled and down below bells rang signaling the engineers to stop, start, and reverse engines. Many boats also had a series of hollow (usually one way) speaking tubes which allowed the pilot to get a little more creative in their communication. (See Mark Twain’s copious notes in Life on the Mississippi describing the flowery cursing that was common among pilots and crew.)

Most pilothouses had stoves to keep the pilot warm, and a lazy bench as seating for visitors and guests. Large bells on the roof of the boat signaled the leadsman. Whistles, often controlled by treadles on the floor, allowed the pilot to blow the steam whistle.

Mark Twain, served as Horace Ezra Bixby’s cub pilot on the steamer Paul Jones, a 172′ sidewheeler out of Pittsburgh. He described her pilothouse as “cheap, dingy, battered rattle-trap, cramped for room” but after the Jones, he and his mentor spent some time on a much larger and finer vessel1 and the pilothouse there was entirely different:

“…here was a sumptuous glass temple; room enough to have a dance in; showy red and gold window-curtains; an imposing sofa; leather cushions and a back to the high bench where visiting pilots sit, to spin yarns and ‘look at the river;’ bright, fanciful ‘cuspadores’ instead of a broad wooden box filled with sawdust; nice new oil-cloth on the floor; a hospitable big stove for winter; a wheel as high as my head, costly with inlaid work; a wire tiller-rope; bright brass knobs for the bells; and a tidy, white-aproned, black ‘texas-tender,’ to bring up tarts and ices and coffee during mid-watch, day and night.”

—Mark Twain, Life on the Mississippi

My new novel Coal Belly is a weird-west steampunky fantasy set on a planet crisscrossed by interlocking rivers. It’s a rough-and-tumble place where riverboats are omnipresent and necessary for everyday life. One of the main characters in the novel is a riverboat pilot, and learning the ins and outs of the pilothouse, how a pilot moved, and how they behaved in their domain was key to making my pilot an authentic character. I’m still hard at work on editing the manuscript (which I finished earlier this year), but I believe people will enjoy reading about her adventures among the Thousand Streams.

Below are some images of pilots and pilothouses which I have collected during my research. You’ll see rooms of all types, from the simple to the more fanciful and you’ll meet some of the people that worked there as well.

Pilothouse of an Unknown Steamer

Pilothouse of the Str. Horatio Wright 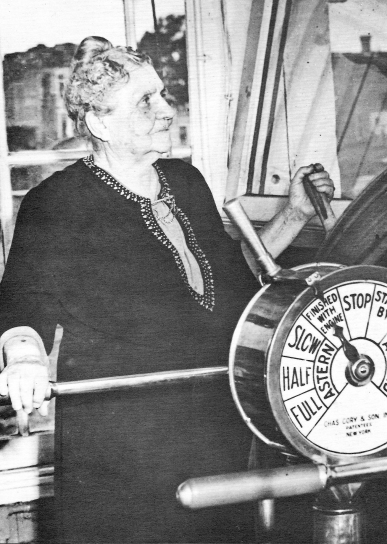 Captain Mary Greene was captain of Greene Line steamboats, and the only female steamboat captain in Ohio 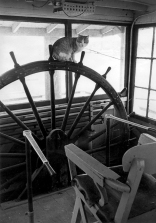 Captain Way was the youngest steamboat captain on the Mississippi River 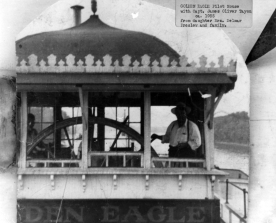 Pilothouse of the Str. Golden Eagle

A pilot salutes in the pilothouse of the Str. Stacker Lee

Capt. Bruce Barnes stands at the wheel in the pilothouse

Fanciful ‘gingerbread’ decorates the pilothouse on the Str. Washington

View from behind the wheel of the Str. General Allen 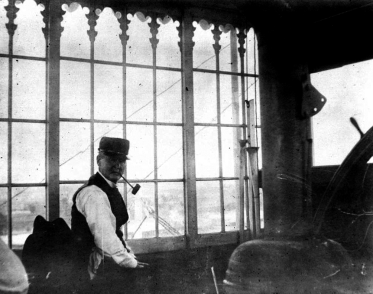 View of the pilothouse of the Str. General John Newton

Pilothouse of the Str. Eureka, a sidewheel ferry

Pilot Edgar Brookhart in the pilothouse of the Queen City, 1910

Pilothouse of the Str. Sprague 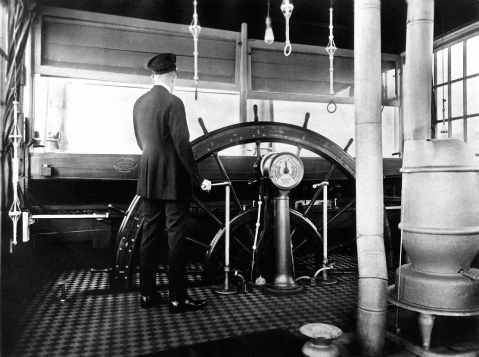 Pilot Harry English at the wheel in the pilothouse of the Str. Queen City, 1918

Capt. James (Big Jim) Brusbee and Capt. Milt Campbell in the pilothouse of the Str. Cincinnati 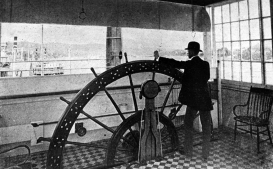 Captain Ben Pattison and Pilot Harry W. Doss stand beside the wheel in the pilothouse of the Str. Island Queen

Pilothouse of the Str. Kate Adams, also know as “The Lovin’ Kate.”

A man sits at the wheel in the pilothouse of the Str. Delta Queen

Another view of the pilothouse of the Str. Sprague

The pictures above have been collected over the last five years, so I am unsure where they all come (usually the Library of Congress.) But, they’re all old enough to be in the public domain. In some cases, I did some minor color correction and cropping. I’m happy to answer any questions folks have about any of these images or riverboats in general. (Sometimes it gives me a good excuse to research something.) You can send me an email or leave a comment below. I love comments.

A Riverboat’s Pilothouse is the latest in my series of posts sharing my research for Coal Belly. You can check out the other riverboat-related posts with the links below.

1 It’s possible this was the pilothouse to the Crescent City, he and Bixby worked onboard from April to July of 1857, shortly after serving onboard the Paul Jones. It regularly ran between New Orleans to St. Louis.

Over the last few months, I have received a couple of emails asking what I use to write. So, for the heck of it, I figure it would be fun to compile a list of products I regularly use in my everyday process of writing. None of these companies asked me to endorse them or these products. I’m posting these here because I love ’em and want to share my experience with my readers and fellow writers. Hopefully you’ll find something new and useful for your own writing.

It’s starting to show it’s age, but my first tool is my 2012 13″ MacBook Air. I love this little machine, I’ve written five manuscripts on it and it’s served me well. I got the Air because I thought I wanted the portability, but I’m no coffee shop writer, and I’ve since found I don’t carry it around very often. Come upgrade time, I’ll eschew portability and focus on something a bit more powerful. That said, all in all, it’s been a great workhorse. If you’re looking for something nimble and light I highly recommend it.

Scrivener 2 is the software I write in most often. I use it for everything from brainstorming to the actual process of writing prose. It’s incredibly customizable and once you figure out how it use it, it really streamlines the writing process. The more I explore its features the more I love it. It’s also excellent at exporting high-quality ebook files as well. I wrote a quick post about Scrivener a while back, it sums up my feelings about the software and links to a lot of other handy articles.

Scapple is my mind mapping software. I used to use a whiteboard, or a wall and sticky notes. Scapple fully replaced that, allowing me to visually picture my plots, character arcs, and storylines. I love it so much I wrote a whole blog post about it. It’s a good way to keep what used to be temporary work in a digital permanent format which makes it easy to access and reference.

Dropbox is my offsite backup and file sharing solution. I work exclusively off Dropbox. All my files live there. It’s nice to have the peace of mind knowing that my work is safe in the cloud as opposed to on hard drives that can fail, go missing, or be destroyed. Back up often. Seriously, do it right now. I can’t stress this enough.

This Pilot Metropolitan fountain pen is my favorite thing in the world right now. I absolutely love this little pen. I recently decided to switch to fountain pens and was looking for an entry-level pen, as so many can get expensive. The Pilot was recommended. It is under twenty dollars and easily worth every penny. After using this exclusively for the last few months, I ended up buying a second one it’s perfect for taking notes, making quick sketches, and signing books.

The Moleskine Cahier Journal is my notebook of choice (for now). I have used various notebooks for years now and this is the best. It’s not perfect though. For one: I wish it was dotted instead of ruled as I do everything from make notes to draw sketches within it’s pages. The paper also bleeds a bit more than I’d like. All that said, it lays flat, it’s easy to carry, and it’s cheap (you get three for 9 bucks).

So there you go. It was fun to reflect on the stuff I use every day. There are other tools that I could have mentioned (Evernote, Wikipedia, Creative Cloud) but I wanted to focus on the stuff I use day in and day out. If you’re looking for other handy tools I encourage you to check out the toolkit category. I generally post links to handy websites, advice on craft, and software reviews within that category.

What about you? Do you have a favorite tool in your toolkit? Leave a comment below and let us know about it! I’d love to know what products other writers find invaluable in their own process.