“I will never read a normal novel. I just can’t. I won’t. I mean, I keep saying ‘where’s the body? Kill someone. Let’s get out of here. Let’s move this along.’”

While the Bell Forging Cycle novels aren’t specifically Crime/Mystery, they do have elements that would be familiar to readers of those genres. (Murder!) Hence my interest. I found Stasio’s thoughts on character-driven fiction vs. puzzle/plot-driven stories were interesting ones. Especially on how she feels it relates to a book’s length. I don’t this shift is specific to novels within Mystery. Her same complaint could be leveled on some of the current trends happening within speculative fiction.

It’s a quick listen. I found this to be a fascinating glimpse into the working of a prolific reviewer. Big thanks to Kari-Lise for encouraging me to check out this episode of Criminal. I really enjoyed it and think you will as well.

Find out more Marilyn Stasio’s thoughts on crime fiction in her column:
www.nytimes.com/column/crime

Criminal is a production of Radiotopia from PRX. Subscribe and learn more at:
www.thisiscriminal.com

Last week I was lucky enough to join Matt and Cat from Horror Brew, one of my favorite horror-themed podcasts for Episode Thirteen! (Yeah, creepy thirteen! Kismet right?) I had a great time and was happy to be apart of the show. We talked about my books and the world of the Bell Forging Cycle. After that we delve into the weird west and then talked about horror in general; everything from Stephen King’s The Mist to Netflix’s Hemlock Grove. Give it a listen. I’ve embedded it below, so you can listen here or click one of the links and be sure to subscribe!

You can follow Matt and Cat on Facebook, Twitter, Letterboxd, and Instagram. Make sure you subscribe and leave them a review. They put out a great show and are a passionate voice for the horror community. If you’re in the Portland area, check out their weekly horror trivia night at Home, A Bar. It’s a good crowd, and there are usually great prizes. Speaking of…

From now until July 17th you can enter to win a signed copy of my first Lovecraftian urban fantasy novel, The Stars Were Right and a Bell Caravans patch. (I’ll probably throw in some other swag as well.) Entering is super easy, and there are ways you can win bonus entries to better your chances for success. All it takes is a few clicks, enter today and tell your friends!

In November of 1916, Howard Phillips Lovecraft published his first short story, The Alchemist, in the United Amateur Press Association. While his commercial work would come later, there is an argument to be made that November should be considered the birth month of cosmic horror as a genre.

Lovecraft wasn’t the first to write weird fiction; even Lovecraft had his influences. Writers like Arthur Machen, Algernon Blackwood, Lord Dunsany, Robert Chambers, and Edgar Allen Poe were all writing of the strange and macabre before ol’ Howie. Most cosmic horror fans will acknowledge their impact, but I think we’d all agree that it was Lovecraft’s writing that became the definitive work of the genre. Lovecraft’s mythos has gone on to influence a myriad of people; it was his stories that encouraged others to delve into writing and working within the genre. His writing helped forge the genre into the beast it is today.

In celebration, I figured it’d be fun to explore the current universe of cosmic horror and look at some of my primary sources for Lovecraftian fiction on the market today. This will be just a tiny sample of the ever expanding universe of weird fiction. If you have recommendations of your own, leave a comment!

Why not start with my books? (Buy ’em here.) Don your keff, lace up your boots, and enter my dystopian genre-bending vision of the Territories. A world where humanity is no longer alone and strange creatures inhabit vast multi-leveled megalopolises built upon the backs of drowned cities. A place of violence, where killers stalk narrow streets, and shadowy cults work ancient rituals to awaken forgotten elder gods. Standing in their way is one soul, a road-weary caravan master armed with an antique revolver, a droll wit, and a hardened resolve. Read an excerpt at any of the links below.

Weird fiction is still alive and well, recently Penguin re-released a limited edition paperback, and a quick search for “Lovecraft” will usher forth all sorts of collections. However, some of the most exciting work in cosmic horror can be found among the small presses.

Some of my favorite podcasts focusing on Lovecraft and cosmic horror.

This list could get long, so I will keep it to novelists of whom I have read and who’s books I’ve enjoyed. If there’s someone I missed (highly likely) or a writer that you’d like to recommend (also highly likely,) leave a comment! Links attached to the author’s name will go to their website or blog; book links will go to Amazon. (But you should buy from your local indie shop.) Also, don’t forget to leave a review!

This has been just a tiny sampling of the world of cosmic horror as it exists today. The genre hasn’t gone away. If anything, we see its influence grow more and more in all forms of popular culture. It has reached beyond books and into movies, table-top games, toys, comic books, television shows, and video games. The fundamental terror brought by the fear of the unknown and the creatures that lurk in spaces beyond is something that draws readers even today. So join me in wishing Cosmic Horror a lovely one-hundredth birthday! It’s been a great one hundred years, and here’s to a hundred more!

Did I miss something? Have a favorite writer, podcast, or small press house that I missed?Leave a comment and let us know!

Halloween approaches and it’s giveaway time! The Northwest Horror Podcast, one of my favorite local podcasts, is giving away three signed copies of my latest novel Red Litten World. You can find out how to win by listening to their latest episode, just download or stream it via the Northwest Horror’s blog. It’s a fun contest and really easy to enter.

Also, make sure you subscribe to Northwest Horror! You can do so with iTunes, or with their Stitcher station, or via Lybsyn. Also, follow them on Twitter and on Facebook. Matt, Vic, and Cat run a great horror-centric podcast covering all things horror related that means: games, cons, movies, television, books, and loads more. It’s good stuff.

Thanks for Matt and Cat for their kind words on this week’s episode. I hope everyone enjoys the podcast and good luck to those of you who enter!

My last recommendation post was for Device 6, and it’s been awhile since I’ve done one of these. Like over a year. So let’s rectify that!

Today, I have a podcast recommendation for you: Imaginary Worlds is a free podcast from Eric Molinsky focusing on the worlds of science-fiction and fantasy. Coming at it from a fan perspective Molinsky explores why we as fans love these worlds, what draws us to them, and why they resonate with us. Unlike a lot of other podcasts, Imaginary Worlds is quite deep. Molinsky takes a candid and fresh approach to subjects like: the origin stories of heroes, the tale of the mysterious author James Tiptree, the real history of Salem, Massachusetts, the canon of Star Trek and its relationship to the Torah, and even how modern politics is reflected in Game of Thrones. I found each episode quite engaging and before I knew it I quickly binge-listened my way through the series. You can listen to one of my favorite episodes below:

Subscribe to Imaginary Worlds at iTunes or from Stitcher. The episodes are usually less than twenty-minutes in length making it really easy to fly through these. I recommend starting at the beginning. If you like the podcast leave a review on iTunes as well, it’s a great way to spread the word to other potential fans of Imaginary Worlds.

Last week I was invited by Shannon and Matt over to the Geekly Studios to be on my favorite podcast: Seattle Geekly! The day has arrived, the podcast is up, and you can listen now! Download the episode from iTunes, listen to it on Seattle Geekly’s website, listen over on Stitcher, or just hit play below: 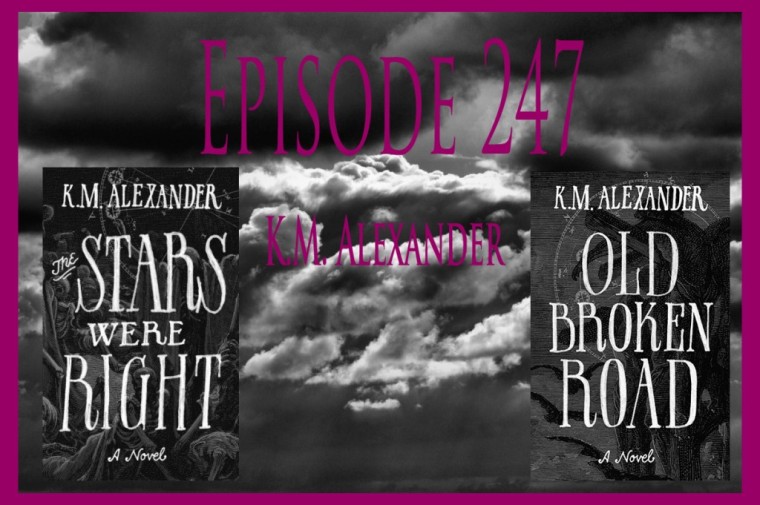 I’m honored to be one of the final guests for a great podcast. I had a lot of fun and I hope everyone enjoys it. Huge thank you to Shannon and Matt for having me on. It was nice to relax and geek out for a while. (Also, Matt, I’m still very interested in joining you for that session of Call of Cthulhu.)

Seattle Geekly is giving away a few signed copies of Old Broken Road along with the launch of today’s episode. To win all you need to do is tweet with the hashtag #KMAbook before 3PM tomorrow (02/20/15). There’s still plenty of chances to win. Good luck!

Waldo Bell learns reality is not what it seems, and a new apocalypse is closer than anyone predicted.
∙ Learn More →
∙ Coming Soon!